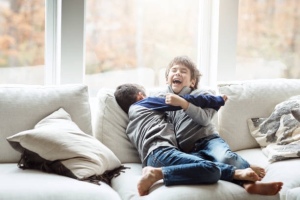 “Ah two boys! And so close in age! They must be great friends…!”

Well let me tell ya folks, it’s 50:50 around here when it comes to how these boys get along…

“Frenemies” is probably the best description!

Since Small Bro turned 3 last Summer, the dynamics between the duo has changed radically. Up to that point, Big Bro was the undisputed boss. Boss of the toys, boss of the games, boss of the telly!

But as I have blogged/ranted about before, a 3 year old is a force to be reckoned with! They have their own thoughts, opinions and ideas. And you better shut up & listen!

Things have gotten even more interesting since Christmas time. Small Bro has really found his voice, found his feet and also found his fists…

He is no longer content to watch whatever Big Bro chooses. He will not stand for being railroaded into games that he doesn’t want to play. He won’t tolerate being taken advantage of, and finally understands when that is happening…

So yes it’s a Frenemies kind of relationship. They absolutely adore each other, they love spending time together, they miss each other when they are apart. They also annoy each other, rub each other up the wrong way, hit, scream, fight… and sometimes bite!!!

I have found myself sliding into the role of referee more than mediator. With two children of any gender I suppose it’s to be expected, but with boys there is definitely an extra demension of the risk of grevious bodily harm…

One of the new favourite “games” is wrestling.

Grabbing, pulling, rolling around on the ground intertwined in each other kind of wrestling.

Great fun for a while, then the inevitable screaming starts and I don’t hold back on the “I warned ye!”

And two seconds later, they’re back at it again.

When Small Bro was born, almost everybody said to us, “Oh two boys now ye will have yer hands full keepin’ up with them!” And sure enough we have…

It is so entertaining & also fascinating to watch the dynamics change between them. They remind me of myself & my own siblings growing up. Always nagging & bitching, pulling out of each other, fighting over the remote, screaming at our poor withered mother that someone KEEPS LOOKIN’ AT ME!!!!

And we all managed to survive and not hate each other coming out the other side of it.

It’s definitely a Frenemies dynamic when it comes to most siblings. In fact it freaks me out when I hear of siblings who are always loving life with each other… surely that can’t be normal?!

If you are enjoying my posts, I would love if you could subscribe below to have my new posts mailed straight to your inbox😊

Sonder Magazine - n. the realization that each random passerby is living a life as vivid and complex as your own.

...the superbly honest blog of a Thoroughly Modern Mammy

Healthy Eating, Naked food, My journey to a healthier me!!

Politics, things that make you think, and recreational breaks

I'm a Mammy, a wife and a woman who is searching for her identity, and venting about family life!

In a world of Parenting Peer-Pressure & Perfectionism, the Millennial Irish Mammy keeps it real.

A daily selection of the best content published on WordPress, collected for you by humans who love to read.

In a world of Parenting Peer-Pressure & Perfectionism, the Millennial Irish Mammy keeps it real.

The latest news on WordPress.com and the WordPress community.